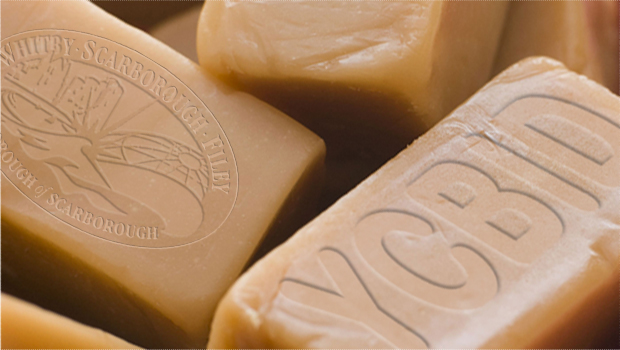 The world of academia recognises two distinct types of chaos.

The first type of chaos (the type generally understood by we lay people) is the type of chaos underlying such unpredictable phenomena as the weather, for which, because of the sheer number and inter-relatedness of the variables, predictions are, by definition, vague and short-term. There is no methodology for predicting the weather on the opening day of Royal Ascot 2025. Further, predicting that it will be sunny (or showery) will have no effect on the weather five years from now.

The second type of chaos includes an extra element. For example, market fluctuations may, at first glance, appear to be as unpredictable as the weather. However, predictions about the stock market (for example) present an extra and external variable. For example, the very prediction that the price of crude oil will increase by 20% before the end of the year may prompt that increase to arrive much sooner, as investors rush to buy in at today’s prices, hoping to ‘ride’ the 20% increase to an easy profit by year’s end, thus forcing up prices more or less  overnight.

I wish to announce a third type of chaos, as witnessed at Scarborough Borough Council, where the unknown variable turned out to be the sheer ineptitude of the Mayor, Councillor Hazel LYNSKEY [Con.]. Councillor LYNSKEY has been Mayor before. One shudders to think of the unreported chaos over which she must have presided in the past.

The meeting was attended by a somewhat larger than usual public gallery, principally comprising business proprietors appalled and angered by the results of the Consultation process conducted by Yorkshire Coast Levy Payers Association (YCLPA) mirroring the original Consultation carried out by Mosaic Ltd in order to provide democratic authorisation for Yorkshire Coast BID Ltd (YCBID) to impose a 1.5% levy on qualifying businesses (i.e. those ‘tourism related’ businesses with an RV in excess of £12K per annum).

The question on the lips of all concerned was this:

Following an orderly ‘presence’ outside of the Town Hall, YCLPA members took their seats in the public gallery to observe, in particular, the Council’s conduct of Agenda Item 6(ii):

As disclosed in my article “DBID: A Red Herring in MOTION” (pub. Fri. 1st Nov.), Labour-Co-op Councillor Liz COLLING had already countered the Motion with an Amendment:

I therefore propose that in the interests of prudence and good practice, this Council instigates an independent and impartial investigation of the role of Scarborough Borough Council in carrying out the DBID ballot.

Commenting that she felt the ABBOTT/CHATT Motion “over-reached”, in the sense that it sought to get to the very bottom of the matter, she conceded that there are “legitimate concerns”. She then revised her Amendment to read:

I can report, with displeasure, that there then followed the customary cross-Chamber sniping. Petty point-scoring of the “Why did Councillor CHATT not raise his concerns before anyone knew there was anything to be concerned about” variety? Or the “Why did Councillor SIDDONS U-turn on his ‘awkward questions’ to the BID Panel strategy when he became Leader” variety? Comments made of such poor cloth do credit to no-one.

Some Councillors, however, spoke incisively about the nature and gravity of the apparent discrepancies exposed by the Yorkshire Coast Levy Payers Association (YCLPA).

Councillor Subash SHARMA [Lab.] expressed concerns arising after the Ballot. How could a funeral director, a Post Office and a laundrette in his ward have found their way onto a list supposedly constrained to ‘tourism related’ businesses? He then supported the COLLING Amendment and defended the Labour administration’s record on transparency, blaming the previous administration for having failed to scrutinise aspects of the ballot process that have only come to light since after the local election. Hmmm.

Councillor Michelle DONOHUE-MONCRIEFF [Ind.] asked for legal advice regarding the extent of the Council’s investigatory powers. She seemed confident in stating that the polling list provided to Mosaic had been “sifted”. Was that a euphemism for “cherry pecked”? In my view, that would carry a clear implication that the democratic integrity of the vote may have been fatally compromised from the outset – by SBC.

However, the Monitoring Officer stated that, in effect, the Council had no powers to investigate a third party. She did not mention that the Council has a very close relationship with the North Yorkshire Police (NYP), whose powers to investigate are wide-ranging, and certainly include electoral fraud. NYP would be likely to act upon a formal request from the Council, just as they did in the cases of former Councillor Tim LAWN [Con.] and Councillor Jim PRESTON [Con.]. That avenue was withheld from members.

Councillor DONOHUE-MONCRIEFF responded, concluding that the Council must be seen to be fair to all parties, including the prospective levy-payers; their input must be included in any investigation.

Councillor Mike COCKERILL [CIM] spoke at some length about his own serious doubts about the “correctness and completeness” of the Ballot. Had the Council provided Mosaic with an accurate and up-to-date list of qualifying businesses? Apparently not. Some ballot papers had seemingly been sent to businesses that no longer existed. Was the process fit for purpose? He was uncertain about the “completeness and accuracy” of the polling list, which was fundamental to the democratic integrity of the Ballot. The authenticity of the inclusion of certain businesses was also open to question. Councillor COCKERILL concluded with three elements for the investigation to establish:

Councillor COCKERILL thus proposed a Second Amendment seeking to include all these aspects of the process within the investigation. This, of course, was supported by Councillor CHATT, who must have felt that this was as close to Councillor ABBOTT’s original Motion as was ever likely to see the light of day.

However, the Mayor, who by now was pushing the limits of her attention span and general comprehension, did not seem to recognise the COCKERILL/CHATT Amendment to the Revised COLLING Amendment for what it was.

Instead, the Mayor moved directly to the vote on the Revised COLLING Amendment, though by now, the precise form of words of her revision was no longer readily to hand. Did it, in the Mayor’s mind, subsume the Second Amendment from Councillor COCKERILL? Who knows? Or did it draw solely on the suggestion of Councillor Andy BACKHOUSE [Con.], who also bemoaned an absence of “completeness” in Councillor COLLING’s Revised Amendment, calling for the inclusion within the forthcoming investigation of all parties involved in the Ballot?

Councillor COLLING then indicated that she accepted Councillor BACKHOUSE’s Amendment as a Revision to her (already carried) Amendment which would now, post facto, read:

Revised Revised Amendment (or Amendment to a new substantive Motion?)

I therefore propose that in the interests of prudence and good practice, this Council instigates an independent and impartial investigation of the role of Scarborough Borough Council in carrying out the DBID ballot and that SBC urges the Yorkshire Coast BID company and its predecessor, the BID company, to fully participate in the investigation.

Mrs DIXON indicated that, though the earlier Amendment had already been carried, this suggestion could be minuted for inclusion in the terms of reference of any investigatory body. Councillor COLLING suggested requesting new CEO Mike GREENE to appoint an investigator.

Finally, at the belated suggestion of Councillor SIDDONS, a second vote took place and the Revised Revised Amendment (or was it an Amendment to a new substantive Motion?) was duly carried. Confused? The Mayor will explain all. 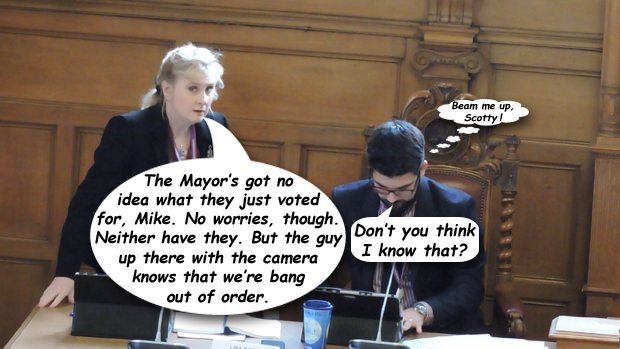 What it all means

If the Council investigation identifies no impropriety on the part of the Council, the DBID will proceed as planned.

If the investigation does identify impropriety, the establishment of YCBID Ltd will be seen to have been severely compromised by some unnamed Council Officer’s laziness or incompetence, but the DBID will proceed as planned.

Meanwhile, the North Yorkshire Police is to consider evidence lodged by the YCLPA.

Has anything been gained by the ABBOTT/CHATT Motion? Yes; for without it, this rather distasteful mess would have passed unnoticed by most Councillors. At the very least, it has produced more “openness and transparency” than all of the Leader’s rhetoric. For that, we should be grateful.

Later, in a statement to the Scarborough News, the Chair of Yorkshire Coast BID Ltd, Mr Clive ROWE-EVANS, stated:

“The ballot was run independently of the BID by the returning officer at Scarborough Borough Council. An appeal submission against the ballot has already been ruled as invalid by the Secretary of State, and we welcome this investigation and are confident that it will show that it was run in full compliance with the BID Regulations of 2004.”

He would, of course, say that. I wonder why he made no mention of the revised Appeal to the Secretary of State? Or the bobbies?

However, rumours that an emergency meeting of the Board of Directors of YCBID Ltd will take place in a day or two, at an undisclosed location, suggest that Mr ROWE-EVANS is rattled – as well he might be. His Directors may vote to put the BID to BED before their reputations sustain any further injury.