SBC: Another £60K Down The Pan 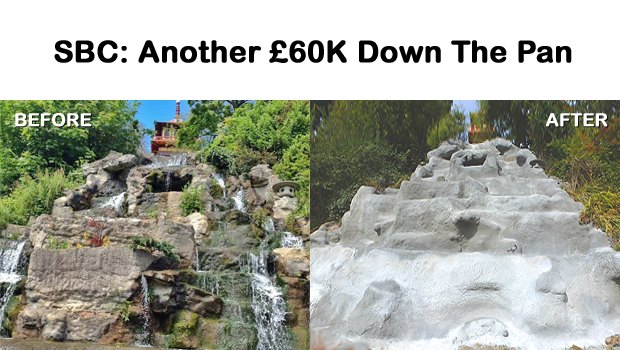 SBC: Another £60K Down The Pan

Residents and visitors to Scarborough are familiar with one of the town’s more unusual landmarks – the lovely Pagoda situated in the Grade II listed Peasholm Park, in a residential area on the north side of the town.

I vividly remember my first sight of it as a seven or eight-year-old child in the 1950s. I had never seen anything like it. Presiding majestically over the lake, the Pagoda seemed at once exotic and more than a little awe-inspiring. The rockery waterfall cascading from the Pagoda down to the lake had the appearance of a natural geographical feature so convincing as to transport the viewer to the another time and another place. 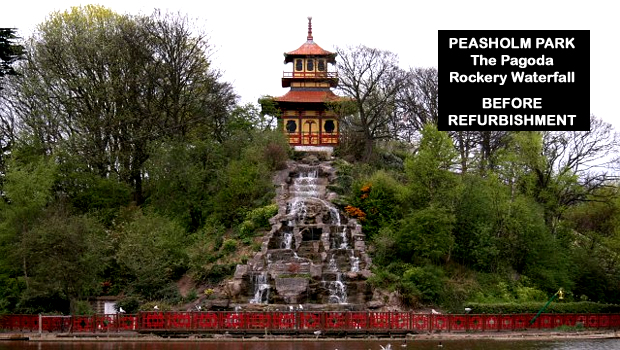 It is quite some time now since I visited Peasholm Park, so I am grateful to the member of the public who drew my attention to the travesty of refurbishment recently undertaken by Scarborough Borough Council (SBC) through the auspices of the Council’s preferred contractor, Transcore Ltd.

The following image – after the refurbishment – provides far more than the proverbial thousand words of commentary on the insensitivity and sheer incompetence of the refurbishment work which, according to the SBC web-site Open Data public record, has depleted the public purse to the tune of £59,837.50. 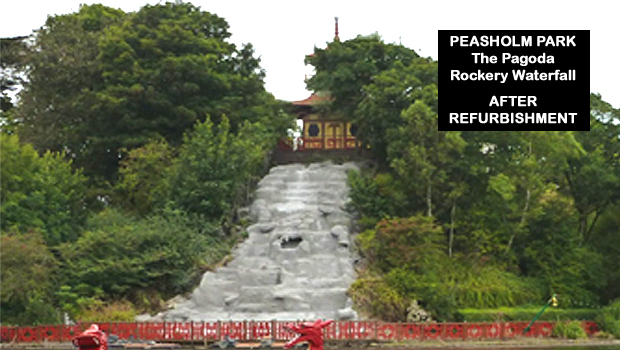 I am not alone in thinking that it looks absolutely hideous and stands now only as a testament to the calibre of numbskull decision-makers presently in charge at one of the worst Councils in the country.

One Councillor, to his eternal credit, has gone on the record frankly and eloquently to describe it as a “mess”.

Undertstatement of the year (so far).

How would you feel if a professional landscaper took your money for a garden water-feature that turned out like a re-write of Richard HARRIS’s “McArthur Park”:

Peasholm Park is melting in the dark
All the sweet, green icing flowing down
Someone left the cake out in the rain

I don’t think that I can take it
‘Cause it took so long to bake it
And I’ll never have that recipe again, oh noooooo”

But the official line is the usual shuffle sideways, providing only the useful information that the £60K already spent will not be the final figure on this latest fiasco.

“I have now had the opportunity to take a look at the waterfall and speak to officers about the complaint received and would respond as follows. The Waterfall within Peasholm Park has been refurbished due to the identification of a significant void within the structure.

The previous finish applied to the Waterfall was a sprayed concrete the same as the recent refurbishment. The current finish is concrete and has been applied to follow the profile of structure. To facilitate the refurbishment works a significant amount of vegetation had to be removed/cut back, which together with the initial colour of the concrete finish may give rise to an appearance that is out of keeping with the parkland setting. However, the material will quickly weather and mellow.

I have asked officers to accelerate this process by coating the cement and emptying the top pond, which contains green water, down the coated waterfall to promote early Lichen and moss growth. In addition there is also some planting required to infill the top and sides, this will also help the appearance. Once the vegetation regrows the Waterfall structure will again start to appear as people fondly remember.

The initial appearance is, unfortunately, an unavoidable consequence of a major refurbishment.

The cost of adding a colouring agent to the concrete would have been in the region of £20k which could not be justified, given that nature will soon colour the surface, once the water is flowing again. In addition the concrete had to be left to cure to ensure that no residual chemicals leaked into the water, as this could have killed the fish in the lake below.

Unfortunately the pump at the bottom of the Waterfall has ceased operating, hence the additional period that the Waterfall has remained dry. This is not an uncommon occurrence when pumps are switched off for a period of time. A specialist contractor has visited site and undertaken an initial examination but was unable to identify/resolve the issue. The contractor is returning to site on Tuesday 9thSeptember to lift the pump out and conduct a comprehensive examination.

All of the above have nothing whatsoever to do with the concrete contractors, who have carried out the works to the specification given.

‘Slim’, of course, has deftly sidesteped the likely costs of the additional “coating” to the cement, “emptying the top pond” or the necessary inspections and repairs to the as yet unidentified problems that have rendered a good pump useless.

One wonders how far these additional costs will eat into that notional £20K that the Council allegedly saved on the addition of the “colouring agent”.

Value for money? From the preferred contractor’s point of view, perhaps.

One also wonders what view the Friends of Peasholm Park (FoPP) will take? Perhaps they will be asking the Council to consider whether or not FoPP might be better placed to overview any future decisions? They could hardly do worse.

Meanwhile, the public is left to live in hope of the day that someone in the SBC bunker walks out into the sunshine on the front steps of the Town Hall, with hands held humbly aloft, saying, “Sorry, folks. We screwed up. But we promise that it will never happen again because we recognise that we are simply not up to the task in hand, so we will be doing the honourable thing and stepping down”.

Not much CHANCE of that, eh, David? 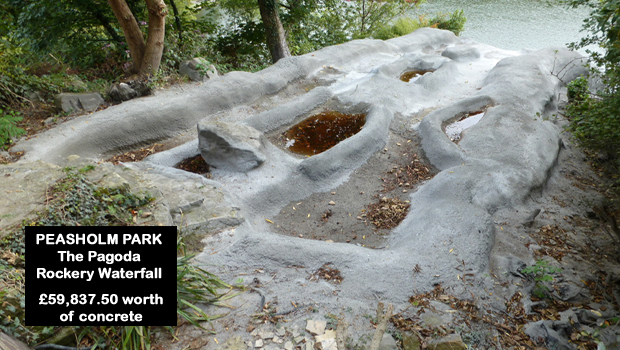