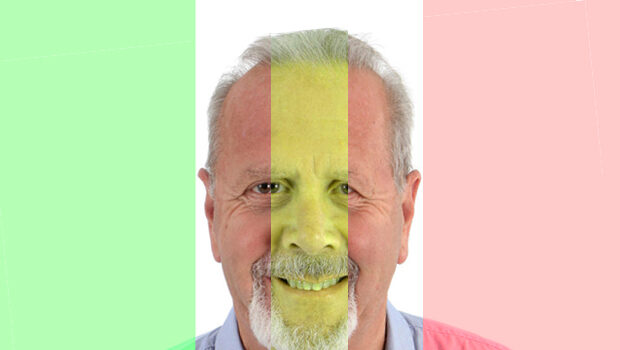 ~~~~~
Further to my earlier article “CWTRA Meeting: ARGOS”, and by way of background to the following up-date ahead of the meeting of the Castle Ward Tenants’ & Residents’ Association on Tuesday 23rd November 2021, readers may wish to be reminded of the position taken by CWTRA Chair, Councillor Janet JEFFERSON [Ind.], as expressed in Cabinet:

How closely Councillor JEFFERSON’s stated views parallel those of her Castle Ward tenants and residents is a point to ponder.

When asked to comment on how the meeting would pan out, one Councillor responded, “I wouldn’t want to be in Janet’s shoes. She’ll be facing a lynch mob – metaphorically speaking, of course!”.

So regular readers will, I am sure, appreciate the opportunity to review the following email to Councillor SIDDONS, the Leader – an ‘Invitation’ whose co-signatories’ names read like a “Who’s Who?” of the Bottom End:

We are pleased to have opportunity to attend this meeting and are also pleased to hear presentations from the relevant Officers – but there is  a ‘political dimension’ that remains silent.

We, the undersigned, therefore would like you as Leader of the Council  to also attend the above meeting to give and respond to that ‘political dimension’. This will enable you to witness the presentation and engage with the residents views first hand.

This will also be an excellent opportunity to see the residents and demonstrate that the Council is “Putting the residents first in everything it does”.

We look forward to seeing you at the meeting.

— on behalf of Old Town Scarborough

I have to say that my first impression was that this ‘Invitation’ was one helluva long-shot; Councillor SIDDONS [Lab.] is known to have a strong preference for delivering his pronunciamenti by reading them espressivo from a carefully contrived script.
Fielding a barrage of hostile questions is not his forte.
In fact, if memory serves, was it not during one of the two Votes of No Confidence against him that Councillor SIDDONS suffered a mild heart attack (and was succoured by Councillor Eileen MURPHY)?

Now pause for a few seconds to consider your best guess as to the likely nature of Councillor SIDDONS’ response to the ‘Invitation’.

Before committing, bear in mind that Councillor SIDDONS [Lab.] was unable to attend the last meeting of Full Council on 4th November 2021, due to a positive result from a COVID-19 test. It is now 22nd November 2021, some 18 days later. According to the WebMD:

“Early research suggested that it could take 2 weeks for your body to get over a mild illness, or up to 6 weeks for severe or critical cases.”

Naturally, Councillor SIDDONS could not be expected to attend if unwell.

Shortly after the above ‘Invitation’ was sent, the following unsurprising Auto-response came in:

Thank you for your e-mail. I am currently away from my office due to illness. I will try and answer emails when I am able. For anything urgent please contact another Cabinet Member or my PA, Sharon Robinson on 01723 232302 or via e-mail at Sharon.robinson@scarborough.gov.uk

Subsequently, in the light of the above Auto-response, the following email was addressed to Councillor SIDDONS’ nominal ‘Deputy’ and fellow Cabinet member, Councillor Liz COLLING [Lab.], appending the original ‘Invitation’ for her consideration:

As Councillor Siddons deputy, it would be very good if you were were able to represent him at the meeting.

Here below is a further copy of the invitation sent to him:

At the time of submission of this article, all of my sources were confirming that Councillor COLLING had yet to respond.

Meanwhile, selected parts of Scarborough are being ‘carpet-bombed’ with letters and leaflets throwing everything but the kitchen sink at residents, in a last-ditch effort to sway the opinions of a population almost unanimous in its hostility to the proposed barrack-block.

I reproduce these missives secure in the knowledge that the co-signatories to the ‘Invitation’ (near the top of the page) will carry more clout than the following corporate gobbledygook. With a script like this, Councillor COLLING’s task is desperately unenviable.

Let the battle of words commence! 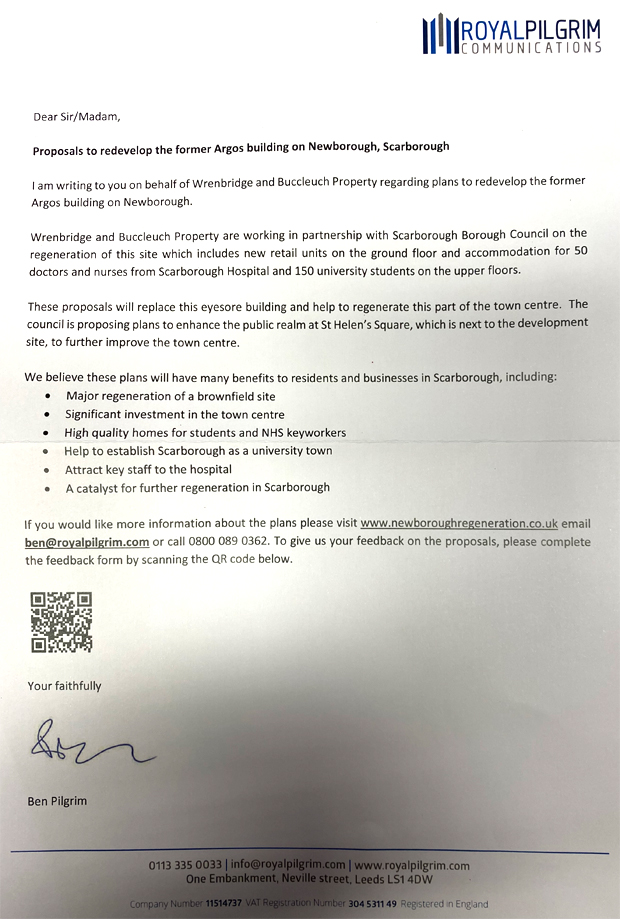 Having read the ‘blurb’, I still prefer the Town Square proposal, as envisaged in the Renaissance Charter – “Kissing Sleeping Beauty“.

For further info, readers are directed to Mr CORRIGAN’s website:

What is the betting now that the ARGOS proposal comes before the Planning & Development Committee “sometime in December”, as the Leader maintained?