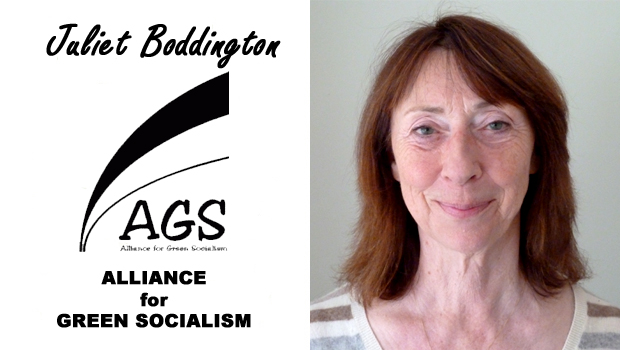 A Letter to the Editor from Juliet BODDINGTON – the Alliance for Green Socialism Prospective Parliamentary Candidate for the Scarborough & Whitby constituency, introduces herself and presents her case for election.

Please allow me to introduce my campaign to the electorate.

The Alliance for Green Socialism was originally formed by a number of Socialist activists after Tony Blair high-jacked the Labour Party and turned it into New Tory. We aim to bring honesty, integrity and principle back into politics so that it cannot be said that all politicians are the same; using their contacts and positions to line their pockets to the detriment of 99% of the population.

I am one of these socialists and have been fighting for fairness and justice for all for well over 30 years. To start with, we need to bring the NHS, transport, fuel and water back into public ownership. We need accountability – our taxes should never be spent without this.

I am particularly passionate about civil liberties and the covert removal of our rights in the name of ‘terrorism’. The most recent concern is the Transatlantic Trade and Investment Partnership (TTIP) currently being negotiated between the European commission and the United States. It is unprecedented in its scale and would be a significant threat to democracy if agreed. Should this horror occur, our government would need to declare any exemptions such as the NHS, education and the like in advance. So far this has not happened.

Don’t waste your vote by casting it to support the greed and selfishness of the few which Margaret Thatcher encouraged and others happily followed. I get told that it is just human nature, but we have many more fine facets in our make- up which are evident everywhere. You have another choice in this election!