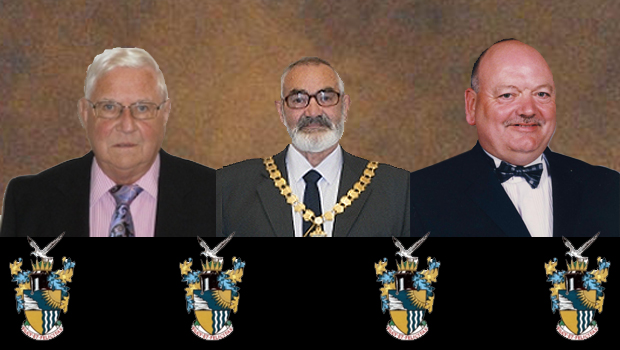 I am sad to report that all seems far from well at my favourite third-tier tentacle of local government – Filey Town Council.

Councillor Robert HORLEY (pictured left above) has resigned from the Council in a letter to the serving Mayor of Filey, Councillor Richard WALKER (centre) .

Curiously, the Council seems unwilling publicly to acknowledge the resignation. Certainly, Mr HORLEY still appears as a Councillor on the Council’s website – albeit with his telephone number redacted.

Mr HORLEY has informed me that his request for his letter of resignation to be read out in Council (and – importantly – thereby minuted, for the public record) has been declined on the spurious grounds that to do so would be a breach of GDPR – this, despite him providing his written consent. There appears to be no reference to former-Councillor HORLEY’s resignation on the Agenda for the December meeting.

Mr HORLEY’s letter of resignation appears here (I have redacted his home address):

Quite who is ultimately responsible for ‘drawing a veil’ over Councillor HORLEY’s departure is unclear but sources close to the Council are suggesting that Mayor WALKER, for reasons unknown, is anxious not to be the subject of unwelcome criticism. Others contend that it is simply another example of that gold chain having super-inflated the Mayor’s sense of self-importance.

This latest conflict follows the resignation of 2017/18 Deputy Mayor Councillor John CASEY (pictured right above), whose departure was also the subject of some contention.

I asked Mr CASEY if he would care to comment and his response (which I reproduce, with his consent, here below) makes clear that Filey Town Council – like almost every public authority in the country – is deeply divided at present. Party, personal and factional loyalties are being stretched to the limit, at great cost to public services and amenities, and (as so often) money is at the heart of the matter.

I resigned in May 2018 (See attached resignation letter)

I had been a Councillor for almost 6 years but latterly I became convinced that there was NO future in staying on board.

The reasons were many but the way toilets were deemed unworthy and a waste of money by a small majority on FTC. Every time the minority tried to get FTC to do something and or spend some of their £780,000 reserves we were blocked by Finance and then the small majority.

I was Deputy Mayor from May 2017 to May 2018. I was promised by the Mayor (Richard Walker) that he would support me as Mayor in May 2018. He reassured me on this on a number of occasions as did his wife.

I went, like a lamb to the slaughter, to the 2018 Mayor making and was astounded to hear that Richard Walker (who had promised me his vote) was nominated by Cllr Meek, saying that I had not had enough training!

Cllr Walker then accepted the nomination on which he voted for himself and he therefore won 7 votes to 6.

To say I felt betrayed was an understatement. I took a few days to consider my position and after discussing it with my wife, I resigned forthwith.

To this date, I have still not had an acknowledgement of my resignation nor have I had any thanks for my 6 years service on the Council.

I believe and have been told by many members of the public that they were upset I had resigned and had wanted me to stay on.

Some people still treat me as a Councillor and ask my advice, which I freely give.

Now of course the minority is even smaller and unless something drastically happens in May elections, I feel that FTC becomes even more insular. Some Councillors do nothing but moan about SBC and the Cabinet, but they act like a Cabinet within FTC.

Hope this helps Nigel, I have no problem with this being aired in public.

Here, below, is former-Councillor CASEY’s letter of resignation (I have redacted his home address):

These symptoms of division are sad to observe given that less than two years ago FTC was almost unanimous in its vote of No Confidence in SBC Leader Councillor Derek BASTIMAN [Con.], his Cabinet and the Chief Executive, Mr Jim DILLON.