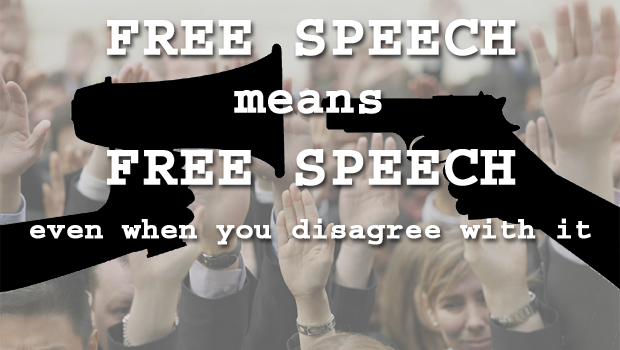 Think of the most objectionable, obnoxious and abhorrent opinion it might be your misfortune to have to hear: that is freedom of speech; and, do you know the hardest part about it? That it is something that must apply to other people, not to you: because you know that what you believe is considered, reasonable and, above all, right, whereas the opinion you find so hateful is, well, just that. Unfortunately though, when you reverse the situation and put yourself in the other person’s place, your opinion will almost inevitably be considered just as objectionable.

Having accepted this premise, however difficult that might have been, the problem that then arises is that many people seem unable to tolerate this freedom for the other person (who must, by definition, be thought ‘bad’ to hold such a ‘bad’ opinion), but feel it is incumbent upon them to persuade you to change your opinion by the force of their rhetoric.

The reason why I can state this so baldly (with the exception of the latter assertion) is that I am a hostage to these feelings myself sometimes, and it takes a conscious effort to avoid classifying a person, who holds views I might consider anathema, as objectionable as the views that s/he holds. This judgmental impetus, which can spring from many and various cultural patterns in our backgrounds, does have serious implications for the future of humanity, and in my humble opinion (with which all of my assertions should, of course, be prefixed, but which I eschew, to avoid tedious repetition) it is a fundamental issue to which our not-always-revered religious and political leaders should be addressing themselves.

What the world needs now, more than ever before, even where there is a history of violence, is respectful dialogue, which has been seen to achieve positive results time & time again, even if not always first time; the alternative, a knee-jerk reaction, nearly always involving a military intervention of some degree, without exception producing negative consequences (unless you are an arms manufacturer, any field of commerce associated with the foregoing, an undertaker, etc.: you get the picture).

Does this mean that anything goes, when it comes to the holding and expressing of an opinion: no holds barred? Taken to its logical conclusion: yes, it does. Does that mean that we should accept any & all opinions, however much we might disagree with them? Yes, it does. Does that mean we should accept any beliefs that could actually or potentially have a negative or dangerous impact upon us as individuals, without peacefully trying to reach an understanding that removes that threat, expressed or implied, from us as individuals?

You will note that I have only mentioned individuals, not groups of individuals, such as governments, or less easily defined groups such as tribes, or ‘countries’: this is where the disjunction with ‘the real world’ arises; with the exception, perhaps, of a handful of so-called ‘primitive’ tribes that have been allowed (if discovered) to continue in their primitive lifestyles, the world is controlled by governments, of greater or lesser ‘democratic’ convictions. What this means, however, is that the wishes of individuals, often as fundamental as a wish for peace, are ignored, overlooked, or reframed in the name of democratic representation; or, ‘for the greater good’.

Once again, and without wishing to digress, I am tangentially skimming the surface of the subject of anarchism, but it is too large a subject not to deserve an essay of its own. A way must be found to be as inclusive as possible of the wishes of as many as possible of the (ideally, manageably reducing) population of the world, without this process of inclusivity becoming unmanageable: I think it goes without saying that any non-commercial organisation (if that is even possible in the twenty-first century) with a global remit, such as the United Nations, is hopelessly bogged down in the politics of the individual members, and this is perhaps why (notwithstanding the debatable concerns about ‘cyberterrorism’) many, including ostensibly ‘liberal’ governments, fear the internet and strive to control or suppress it as much as they do, because of the potential it presents for individuals to work together outside the confines of government.

Given that they (from my admittedly limited knowledge, anyway) seem to have lists of fairly basic recommendations of a prescriptive, or proscriptive (or both) nature, the most fundamental of which, such as “thou shalt not kill”, should surely be acceptable to all but a hopefully small number of nihilistically-inclined individuals, religions must have a role to play, as long as they are able to accommodate the notion that they should have no more authority over an individual’s opinions than should an elected government: that will not come easily.

Although a significant proportion of the world is lagging behind in terms of available technology (with unfortunate repercussions of dangerous pollution from manufacturing and power-producing processes), almost without exception we seem to be stuck in a nineteenth century mindset with regard to the primacy of commerce over the individual, and the apparent necessity for governments to protect existing resources and/or seek new ones, causing controlled scarcity, with the inevitable consequences for individuals; conflicts, which might appear to be about religious beliefs (find a consensus if you can), and which virtually inevitably suppress freedom of speech, on both sides, nearly always have resources and the currency with which they are ‘bought’, at their heart: the difficulty is always avoiding the flailing limbs of the surface puppets, to find the string-pullers above.

To all those who seek to control: freedom of speech is dangerous.