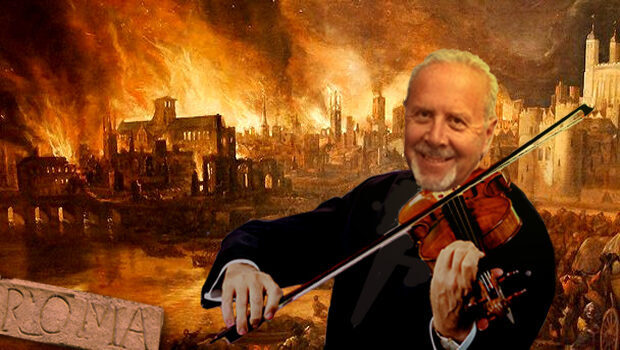 You have avoided correspondence with me, and avoided a face-to-face meeting, since your election to the Council in May 2013.

It seems to me that you have avoided many grave issues since you became Leader in May 2019.

It seems to me that you have attempted to lay the blame for many of your multitudinous failures on “the previous administration”.

But the fact remains – and here my opinion is supported by no lesser personage than Scarborough & Whitby MP, the Rt.Hon. Robert GOODWILL (of whom I am no fan) – that your inflexible determination to rejuvenate Scarborough’s old town with your flagship ARGOS proposal, based on a deeply flawed business plan drafted by a refuse ‘expert’ and a Finance Director (whose accounts remain without the approval of the external auditors for five years), has cost this Borough tens of millions of pounds in central government grant funding. That is the price of what seems to me to be your personal struggle for self-worth.

It is a proposal that has been soundly rejected by six of the most qualified and experience Planners; by the town’s leading business people; and by virtually every business proprietor and car-owning elector in Castle Ward – though your Portfolio Holder for Corporate Resources, who has ignored a number of courteous requests for an explanation for her position, continues to support you – for easily-imagined reasons of her own.

I believe it is you who now owes the people of this Borough an explanation – if you have one.

While you are about it (and this may be your only prospect of retaining your position), you may wish to produce a coherent explanation for the Travelodge fiasco – paying £14 million for a building worth half that, then renting it out to an outfit that (as a rudimentary Google search would have instantly disclosed) was already in financial difficulties, has subsequently defaulted, and now stands under a CVA.

I have neither the time nor the inclination to rehearse my views on the rank callowness of your intemperate remarks in Council, regarding Benchmark and Flamingo Land, as expressed in your acceptance of Leadership speech. You no doubt have an explanation for those grave errors, too. I am not alone in wanting to hear it.

And speaking of grave errors, would you please give me an honest explanation as to why you entered into a ‘coalition’ (as you like to term it) with the Independent Group in which you subsequently, following the ‘wake up’ call of a closely-run Vote of No Confidence, expanded your Cabinet-Lite and submitted to foregoing any right of veto against that Group’s nominations for seats on ‘your’ Cabinet – with the result that you are now encumbered with a seemingly insoluble Safeguarding dilemma?

Please explain to us all how it can be that any elected member can be deemed incompetent to face the consequences of criminal actions and yet, at one and the same time, be deemed competent to sign Council cheques of up to £140K without reference to Council?

And before you resort to your customary excuse (“I inherited that from the previous administration”), please explain how the Council’s Duty of Care is fully extended to one hellion member, yet all other members (and members of the public) are left to follow the pathetic advice of the North Yorkshire Police: “Keep your doors and windows locked”?

I would like you to explain how it was that you and many of your Labour colleagues, including your present Portfolio Holder for Corporate Resources and your present Portfolio Holder for Neighbourhoods, so strenuously objected to Officers’ interception of emails to and from members – until you attained office. Thereafter, you and your colleagues, in an extreme of pusillanimous hypocrisy, reversed your position and ratified Officers’ recommendation to continue spying on and blocking legitimate criticism – now that it was levelled at you.

It has been reported to me that you consider my criticisms unfair. Please explain in what way they are unfair.

In your perception of democracy, am I not permitted an opinion? Are you exempt from the Universal Declaration of Human Rights 1948 (Article 19), the European Convention on Human Rights (Article 10) and our very own Human Rights Act 1998 (Article 10) – all of which guarantee my freedom to express an opinion, and to propagate that opinion without impediment and without regard to frontiers – whether you block my emails or not?

So I offer you, and the Borough, my opinions – and you and your fellow members would do well to digest them.

2) Contrary to your assertions, you have not restructured your Council in such a way as to hand decision-making to all elected members.

3) You have failed this Borough to the tune of millions of pounds worth of missed opportunities for external investment, both from commercial developers and from grant funding.

5) In your determination to retain ‘power’, you have entered into a so-called coalition that has cost you all credibility due to the inexcusable conduct of more than one of your ‘allies’.

6) You have absented yourself far too frequently.

7) You have failed to exert the necessary control over rogue elements of Paid Service and thus allowed yourself to be misled, when the opportunity always existed for you to seek external advice from those wiser and more experienced than yourself.

8) In my view, yours has been the weakest, most dishonourable apology for Leadership since the inception of Scarborough Borough Council on 1st April 1974 – appropriately enough, All Fools’ Day.

9) You have promulgated, at a cost of £175K – £20K of which remains unaccounted for – a plan for a Unitary Authority totally lacking in the necessary mechanisms to undertake such basic services as Education, Highways, Adult Care, Safeguarding, etc.

10) You have been a blight on this Borough.

These are just a few of my opinions. There is no prohibition against being an opinionated man.  I would be pleased to hear you refute them.

Please provide, for your members and the wider public, the explanations I have requested – so that our elected representatives can consider their verdict tomorrow.

Better yet, clear your desk, position your tail firmly between your legs and follow the advice of NORMAN TEBBIT, a YouTube clip of which I append for your consideration, in English and Italian.