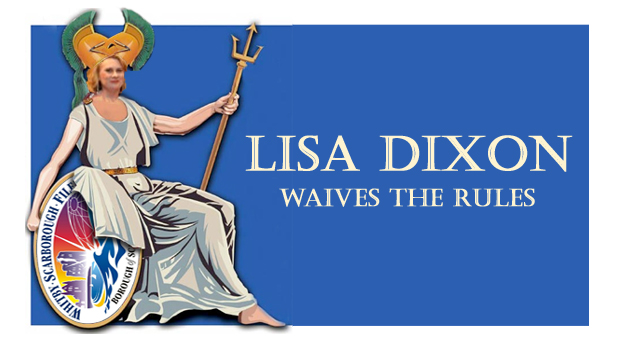 On Tuesday 22nd October, the North Yorks Enquirer published my article “FREEZE the BID? Wheels in MOTION”, in which I reported that Councillor Alf ABBOTT [Con.] (Proposer) and Councillor Bill CHATT [CIM] (Seconder) had tabled a Motion for Full Council, seeking to ‘hit the pause button’ on the progress of its collection and enforcement of the Yorkshire Coast BID levy.

I have since been requested to explain my meaning when I stated, in my article:

“Yet I fully expect the Council’s Monitoring Officer, Mrs Lisa DIXON, to produce one of her curiously idiosyncratic interpretations of the Constitution to disqualify the Motion . . .”

There are two reasons for my expectation. The first is a matter of legality; the second, one of expediency.

I shall deal with them now, in that order.

For legal purposes, it has oft been said that the only definitive interpretation of a legal document is the text itself.

The Motion to which my above-cited comment refers reads:

For those unclear about the meaning of the word, ‘moratorium’ is defined in on-line legal dictionaries, thus:

Any attempt at an interpretation of the Motion can only begin with a paraphrase, so let me begin by offering a purely layman’s interpretation:

“Until the ballot process has been shown to have been conducted entirely properly, or quashed and a fresh ballot held, the Council should hit the ‘pause’ button on enforcement of payment.”

I expected that Mrs DIXON would seek to disqualify this Motion on the legal grounds that the Council is statutorily bound (whether or not it so wishes) to collect and/or enforce payment of the levy, under the terms of original 2004 legislation.

This position has already been set out by Councillor Liz COLLING [Lab.Co-Op.], Portfolio Holder for Economy, Communities & Commercial, in Full Council on 1st July 2019. The relevant Minute is available here. The parts with which we are here concerned are:

Any business which refused to pay the levy would be pursued in the same way as if it had not paid business rates.

Asked what financial and reputational risks the non-collection of the DBID levy posed to the Council as levy-collector, Councillor Colling undertook to provide a written reply in regard to the financial implications. However, it was the DBID company who retained responsibility for the initiative, and who would have to consider the implications of non-collection for their business plan. The Council as levy-collector with the support of the DBID company would enter into negotiations with businesses which refused to pay, but Councillor Colling would expect bailiffs to be used as a very last resort.

The ABBOTT/CHATT Motion does not call upon the Council to stand derelict in its duty to collect the levy.

Rather, it calls upon the Council only to exercise the prudence and caution to ‘hit the pause button’ until such time as the ballot (and other aspects of the YCBID process) can be shown to have been conducted flawlessly or, if such is not the case, to be conducted anew in a flawless manner. This is simply sound sense. In the light of the many disturbing reports, it could be said that the Council would fall derelict in its duty were it not to commission a thorough-going examination.

I mention, in passing, that Portfolio Holders frequently employ the ‘written response’ ploy so as to comply with their duty to be fully “open and transparent” with fellow Councillors – whilst at the same time being parsimonious about sharing the same information with the vast majority of the public.

It is therefore my duty and my pleasure to reproduce Councillor COLLING’s ‘written response’ here: 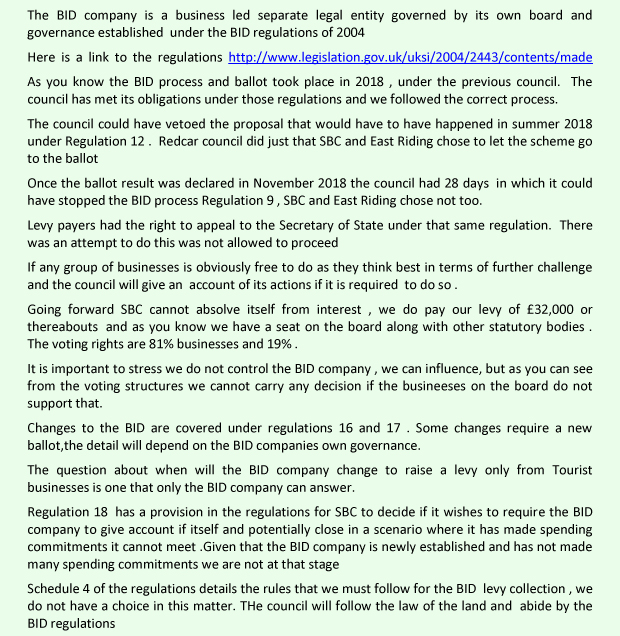 Readers will be aware that I have been deemed “vexatious” by the Council and my emails have been blocked. So I address such objections as Mrs DIXON may choose to raise on the above grounds here in the court of public opinion, as follows:

I am of course aware that the Council has a statutory duty to collect the levy. The Motion as it stands does not seek to breach that duty. It seeks only to offer members an opportunity to apply due caution in its actions.

The Motion offers a ‘pause’ button, so that the validity of the various complaints/allegations can be tested with appropriate rigour.

The appeal to the Secretary of State is under review. Since that time, further evidence has come to light regarding the propriety of the conduct of various elements of the ballot process – responsibility for which lies ultimately with the Council. It is by no means beyond the bounds of possibility that a re-ballot may be ordered, in the face of which, the BID company may decide to withdraw. There may then arise the duty to reimburse levy payers. There may be monies to be recovered from third parties. There may be considerable damage to the Council’s good standing in the business community.

It therefore behoves the Council to look before it leaps.

If the Council has strayed into a position from which it cannot honourably extract itself, it begs the question of the quality and validity of the advice under which members made their decisions.

All things considered, I believe that the Council must examine and debate these issues. In the interests of openness and transparency, this must take place in the public forum of Full Council.

But I do not intend to try this case in correspondence. I insist that it is a matter for elected members.

Having dispensed with Mrs DIXON’s likely legal objection, we can now examine possible reasons of expediency on Mrs DIXON’s part in seeking to block the Motion.

Let me repeat the fifth paragraph of my hypothetical letter to Mrs DIXON:

“If the Council has strayed into a position from which it cannot honourably extract itself, it begs the question of the quality and validity of the advice under which members made their decisions.”

At various stages of the process, Council and Cabinet has ‘given the green light’ to the YCBID reliant upon advice provided by the SBC Legal team. However, and given the many (and multiplying) facts that have since come to light, it is now clear that there is a strong possibility (amounting, in my view, to a strong probability) that the ballot process may have been compromised because:

These and other concerns, taken together, are documented in the considerable body of evidence collated by the Yorkshire Coast Levy Payers Association and provided to the Secretary of State. The sheer weight of uncertainty now surrounding the integrity of the process and the competency of the parties involved positively demands clarity  – clarity in full view of qualifying businesses and the wider public.

The Council is now in a most invidious position.

On the one hand, it is compelled by legislation to administer the collection and enforcement of payment of the YCBID levy. I take no issue with Mrs DIXON on that point.

On the other hand, the Council, having been fully informed (here and elsewhere)of the existence of irregularities or suspected irregularities, is in the deepest peril of supporting a compromised and very possibly illegal application of the 2004 legislation – after failing to acknowledge the increasing level of risk. Did the Council ever produced a Risk Assessment before engaging in the process? How realistic does it look today?

The Council has arrived at this invidious position whilst reliant on the advice and guidance provided by the Director of Legal & Governance – Mrs Lisa DIXON – and her subordinates.

In my opinion, as a matter of expediency, Mrs DIXON could be viewed as having personal reasons, founded in her own responsibility for the provision of legal advice to members – advice which may transpire to have been woefully inadequate. Further, a comprehensive debate on the Motion will inevitably result in disclosure of the fact that advice to Councillors is likely to have been flawed. Thus, Mrs DIXON may find herself in the position of having no alternative but to admit error – not a position any Council Officer would relish, and which will not arise if the Motion is kept off the Agenda. Nevertheless, Mrs DIXON is (or should be) accountable to her employers – the elected members (who, in turn, are accountable to electors.

In my view, and, I would suggest, in the view of every Councillor who intends to fulfill her/his duty to business proprietors (and electors, more generally) and to the good standing of the Council, it is imperative that Mrs DIXON must now direct her efforts to finding a way out of this dreadful impasse into which, on her advice, the Council has stumbled.

A plausible exit strategy is for the Council to commission an impartial independent investigation – even at the cost of Mrs DIXON’s personal embarrassment. Such, surely, is the intent of the Motion:

The Motion has been lodged in a timely manner, in accordance with the law and the Council’s Constitution (not always the same thing) and, importantly, it is both prudent and a proper application of democracy.

Let the Councillors debate and vote. And a may we have a Recorded Vote, please, Councillors?