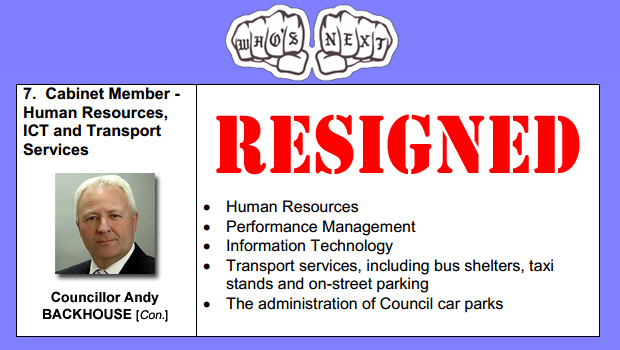 In the wake of last week’s “WHEXIT” – and last night’s “FLEXIT” – it was perhaps to be expected that Councillor Andy BACKHOUSE [Con.] would be the first to seek to distance himself from the increasingly reviled SBC Leader, Councillor Derek BASTIMAN [Con.].

I did not hear the broadcast, but I am given to understand that Councillor BASTIMAN spoke to Yorkshire Coast Radio this morning to announce, apparently with deep regret, that Councillor BACKHOUSE had tendered his resignation, citing “personal reasons and increased work commitments”.

Social media comments throughout the course of the day suggest that residents are disappointed by the news – especially as many feel that Councillor BACKHOUSE represented the best prospect of a new Leader, in the unlikely event that Councillor BASTIMAN should heed the calls of WTC and FTC.

It is also noteworthy that Councillor Andy BACKHOUSE [Con.] was Portfolio Holder for Human Resources – the department most closely associated with the Council’s failure satisfactorily to deal with the “whistleblower” allegations raised by former SBC employee Ben MARRIOTT – thus costing the Council (i.e. the taxpayer) something approaching quater of a millon pounds, and counting.

Some Councillors have suggested that Councillor BACKHOUSE spoke rashly when he assured Council, on 9th January 2017 (the “Futurist Demolition” meeting), that the Council would fully support Director of Legal & Democratic Services in any action she chose to pursue in respect of allegations raised by Mr MARRIOTT:

In fairness to Councillor BACKHOUSE, it was not on his watch that the MARRIOTT affair went bad on the Council – that distinction falls to his predecessor in the Human Resources Portfolio, Councillor Andrew JENKINSON [Con.], who has not responded to public interest questions published here on the Enquirer – to his considerable discredit.

As I write, the GoPetition stands jut short of 2,400 signatories to the Scarborough resident’s call for a Vote of NO CONFIDENCE in Councillor BASTIMAN and his seven (now six) fellow Cabinet members.

Meanwhile, the Scarborough News Poll stands stable at 81% supporting a Vote of NO CONFIDENCE, with approaching 1,800 votes registered.

The next meeting of Full Council at SBC will take place on Friday 3rd March 2017. It remains to be seen whether or not other Portfolio Holders abandon the beleaguered Leader.