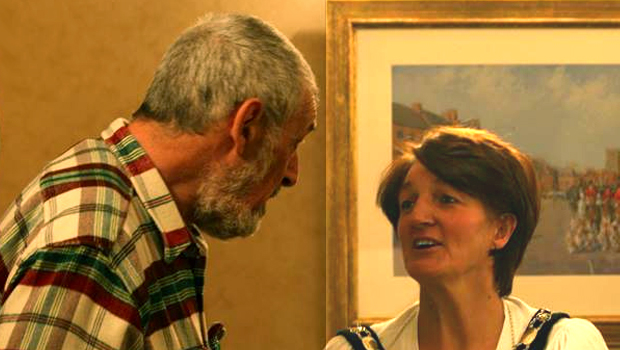 It is a rare and welcome pleasure to be able to report in favourable terms on a Meeting of a Council in North Yorkshire – Bedale Town Council – on Monday 11the August 2014. Regular readers who have followed the extraordinary saga of Exelby, Leeming & Newton Parish Council – Bedale’s near neighbour, just across the A1. Compare and contrast.

Arriving at the Meeting a few minutes ahead of the scheduled opening time, I introduced myself to Clerk Richard HOWARD, requesting him to direct me to his Mayor. Richard welcomed me and introduced me, with great courtesy, to Councillor Christine MOLLARD, Mayor of Bedale, to whom I explained that my colleagues and I were attending the Meeting in order to film proceedings in accordance with new regulations ratified on 6th August 2014.

I assured the Mayor that we would be at pains not to include members of the public ‘in shot’ – a condition which I repeated for the benefit of a young lady member of the public who had attended to make a presentation to Council. I also offered to the Mayor my willingness to respond to questions from Councillors who had perhaps not yet digested the full content of the announcement made last week by the DCLG.

I was happy to address Council to explain the effects of the DCLG statement and how it dispels any ambiguity in earlier legislation; the press and public may film, photograph and Tweet.

Having taken a seat, I was privileged to observe a fairly lengthy Meeting (around two-and-a-half hours), covering a rich and varied selection of important parochial affairs.

It was conducted with great insight and understanding by a Mayor who guided the Councillors through the Agenda (see below) with a gentle and benign hand, assisted (where necessary) by a Clerk of consummate professionalism who, with his IXth edition Charles Arnold-BAKER close at his side (untouched during the course of the meeting), demonstrated not only his tact and local knowledge but also an unprompted willingness to take responsibility for conducting further research in relation to the ramifications of one or two of the more complex legal matters relating to land registration and banking arrangements. 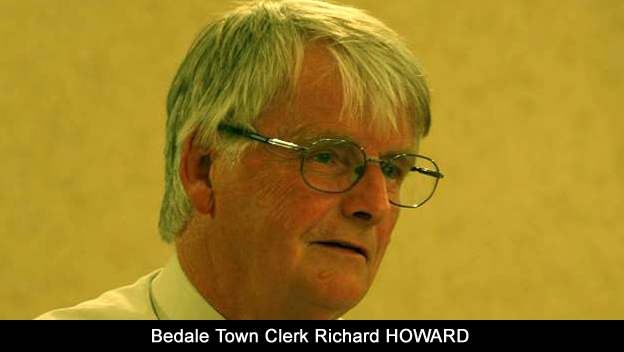 a) Report from Police representative

7. Citizens Advice Bureau – to hear from Carol Shreeve on the work of the CAB as it relates to Bedale.

8. Angel Festival – to hear from the Rev’d Ian Robinson as to how the Town Council may be able to assist with the Festival.

b) Wall at foot of Harbour View

16. Reports of previous month’s meetings etc.  – to hear from Town/District/County Councillors on any meetings attended or other information of interest to the Town Council

b) Banking/investment – to review the allocation of reserves to Barclays, HSBC, Skipton BS and the Public Sector Deposit Fund.

Naturally, the debate on many of the Agenda Items entailed local detail beyond my knowledge. Nevertheless, my abiding impression was of a group of people earnestly seeking to do well by their community. I detected no gamesmanship of any degree and certainly no veiled sniping. Only a concerted and harmonious desire to guide Bedale into the future to the very best of the public interest.

Lest readers are shocked by this (until now) saccharine testimonial, I would like to mention just a few Agenda Items that raised my brow, albeit in a relatively minor way.

Agenda Item 4 lead the way to the co-option procedure addressed under Agenda Item 5.

I should state that I am not will disposed to the co-option process. Without suggesting for one moment that such is the case in Bedale, I have known it in the past that candidates who have failed dismally at the ballot-box have found their way back onto Council, through the good offices of their loyal cronies, through co-option at the first casual vacancy. This is not a proud face of democracy. Coming as I do from a town where we have recently seen a Mayor serve a record three consecutive terms of office without ever having received a single vote from an elector at the ballot-box, I am well acquainted with cronyism at Parish level. It is an insult to the electorate. But let that not take anything away from the candidates who presented themselves her, all of whom expressed a keen commitment to the Bedale community. One regrets, only, that with more candidates than vacancies, no-one in Bedale called for an election. True, elections cost money. But they confer a genuine mandate upon Councillors which sets its imprimatur on the integrity of any Council.

Agenda Item 5 dealt with the co-option of two candidates onto Council, from a pool of three applicants, one of whom had previous Council experience. The voting procedure is slightly convoluted, but Mayor Christine MOLLARD and Town Clerk Richard HOWARD conducted the three polls clearly and transparently.

A poll was taken for the first of the two vacancies, such that the least supported must drop out in the event that no-one attained an overall majority (as was the case here).

A poll was taken for the two remaining candidates, one of whom won. Clerk Richard HOWARD, having prepared papers for all contingencies, immediately approached the newly co-opted member and obtained his signature on the oath of Acceptance of Office, so that he could immediately ascend to Council and take part in the third poll, which was a straight choice between the two remaining candidates, one of whom was duly co-opted, signed up and welcomed to the Council.

Agenda Item 11 was another Item about which I experienced a mild moment of concern. The Council’s resolution to discharge the matter of a £3K grant to Community Communications struck me as having been reached without much consideration given to the importance of soliciting as wide as possible a range of applicants, perhaps through the medium of the local websites. But Councillors were aware of that and my impression was that lessons have been learned for the future.

Agenda Item 14 (Filming Meetings) will be of interest to readers from beyond the Parish boundary.

Councillors were quick to recognise not merely the inevitability of filming but, more importantly, the opportunities it presents to benefit the council as well as the electorate. The Mayor very kindly suspended Standing Orders to allow me to contribute information and respond to Councillors questions.

I must say that the debate on this topic was informed and far-reaching. The Council was quick to recognise that filming and archiving Meetings was a policy worthy of pursuit and, indeed, enquiries had already been made to identify the most secure, reliable and cost-effect methodology. The opportunities for elderly and less mobile members of the community to witness the Council discharging its duties, if not ‘live’ then as in life, was acknowledged, as was the fundamental importance of gaining the confidence and support of the community through an open portal of transparency and accountability.

This is a Council which will afford me great pleasure to visit again – perhaps when District and County Councillors Carl LES and John WEIGHELL make one of their frequent visits. The Council is sharply focussed on the economic well-being of the town and its many tourism-oriented businesses – I hope not to the detriment of the local quality of life.

In post-Meeting casual conversations, I was unsurprised to learn that word of the disgraceful travesty of a Meeting that took place at neighbouring Exelby, Leeming & Newton Parish Council last week, and the even more bizarre waste of Police time at Seamer & Crossgates Parish Council in the Borough Scarborough last November, had clearly permeated the awareness of Bedale Town Councillors.

A cynic might suggest that, mindful of the dangers of bringing the Council into disrepute with a display of inappropriate conduct, Councillors were on the best behaviour on this occasion.

That would be unfair.

I cannot fault the sincerity of the welcome we were accorded. There was no trace of hostility masked by false smiles. On the contrary, I came away very favourably impressed by the Council and particularly by the lady Mayor and her Clerk, who clearly have an excellent professional rapport.

After the Meeting, I was approached by Councillor Clive POINTON. His demeanour was friendly and courteous, his handshake was strong and dry, and his countenance open and at ease.

I left with a strong impression of a cohesive and focussed group of genuine people with absolutely nothing to hide. It will be a pleasure to drop by unannounced for a spot-check at some time in the future.

One major disappontment; I did not notice any press representation from the Northern Echo or the Darlington & Stockton Times.

That is a shame. 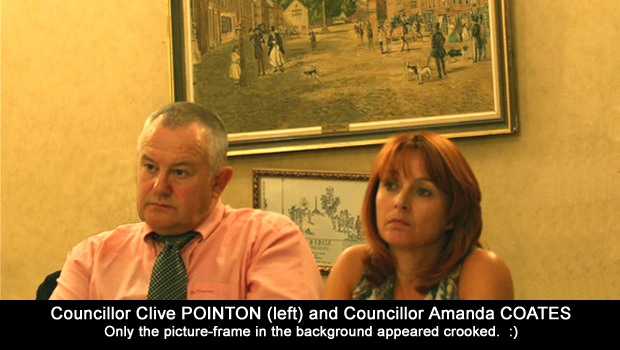 NOTE: Due to an unfortunate miscommunication between colleagues, when this article first appeared I made an error regarding the identity of the Mayor. This has now been corrected and a sincere apology has been conveyed, via the Clerk.