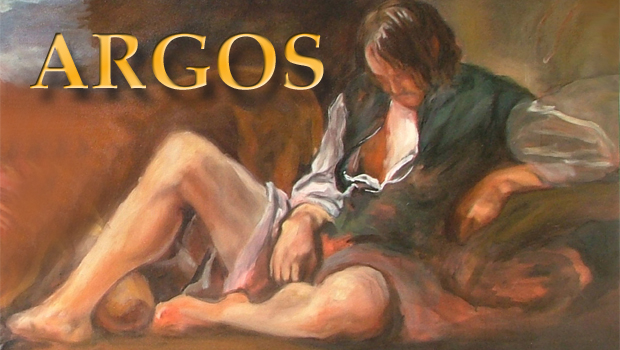 Regular readers will be aware of the continuing saga of the Labour-led coalition presently at the helm of Scarborough Borough Council – at the helm, but by no means in control – and, in particular, the Leader’s Scarborough-centric ‘flagship’ endeavour of ‘Building a Better Borough’, focussed on the £2.8 million refurbishment of the Market Hall and, right alongside, the former ARGOS building.

In July 2019, as a matter of the utmost urgency, Councillors were (I want to say) ‘rail-roaded’ into supporting a resolution to borrow £22 million from the Public Loans Board, over forty years, for the purposes of purchasing and demolishing the comatose ARGOS building and replacing it with 200 student mini-flats, a handful of retail units and a ‘Town Square’.

I say ‘railroaded’ because members were given the most minimal opportunity to study the top secret Report; indeed, some laggards saw it first when it was published on the Enquirer by editor Tim THORNE following an allegedly illegal ‘leak’, allegedly still under investigation by the North Yorkshire Police. (Yes, yes, Lisa – the ‘culprit’ will end up in jail. I bet you would not say that if you knew who the ‘culprit’ was.)

Despite the alleged urgency of the ARGOS decision, the months then rolled languidly by – and with them, the tumbleweed.

October brought the commencement of the ‘purdah’ period leading up to the December General Election; the Council went into ‘treading water’ mode. In January 2020, the distraction of the moment was the No Confidence motion in the Leader. Then, in February, the Leader fell ill. In March, the COVID-19 pandemic precipitated Lockdown and the Council went underground – or into cyberspace.

Only on 16th June 2020 did the Cabinet address the following, tagged on to the end of the Agenda, almost as an afterthought. The Leader, looking care-worn and a decade older than when he assumed office, took the ‘virtual’ Chair. So-called ‘Deputy’ Leader, Councillor Liz COLLING [Co-Op/Lab.], having held the fort during the Leader’s convalescence, had announced that she was taking an open-ended sabbatical – but that did not prevent her from popping in on ZOOM to rally the troops. 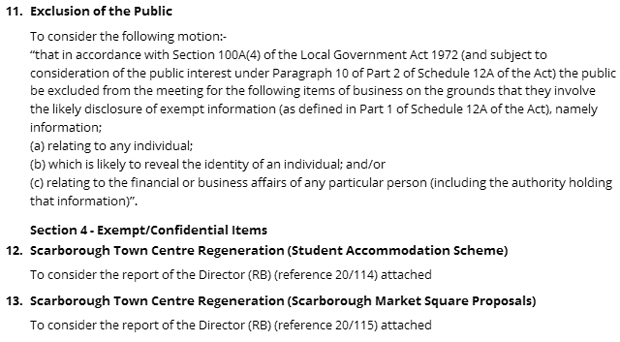 I can confirm that I am not alone in regarding the case made out by Commercial Director Richard BRADLEY as being far from convincing – though it slipped through Cabinet like poop through a goose.

One wonders how – and why?

Fortunately, some of the more experienced Councillors, having been alerted by Director of Legal Mrs Lisa DIXON’s bizarre assertion that there having been no substantive changes in a “budgetary or policy framework” sense, there was thus no need to bring the matter before Full Council), have been picking it apart.

I am now aware of two separate and distinct ‘Call-In’ Requisitions, one from the Independents and the other from the Conservatives, essentially asserting that, contrary to Mrs DIXON’s assertion, the Council’s “budgetary and policy framework” has been completely turned on its head as a result of the COVID-19 pandemic. The call, therefore, is for the whole proposal to be re-evaluated by Full Council before committing to a 40-year loan at a time when no-one can confidently predict even the next four years in terms of the “budgetary or policy framework” landscape.

These ‘Call-Ins’ will be heard, in due course, by the Overview & Scrutiny Board (OSB), members of which (along with every other Councillor) have already seen the following representations from arguably the most knowledgeable planning/redevelopment experts in the Borough. Not even a paranoiac could accuse them of being “manipulative members of the public”:

The Former Argos Site. Act in haste; repent at leisure.

As former planning advisors to the Borough, we are very dismayed at the latest major project being conceived by the Council for the former Argos building in Newborough. Whilst the removal of the ugly 1960s building is most welcome, this misdirected redevelopment scheme seems to have evolved out of the public gaze, is focussed almost entirely on finance and is being driven by external funding rather than civic design. The planning issues, once again, being left to the end of the process, rather than being a fundamental, early consideration. Indeed, we believe that the proposal seriously contravenes the terms of the Council’s own Adopted Local Plan.

If the current proposals, as displayed at the Council’s Overview and Scrutiny Board, were coming forward from a private developer in a planning application, in our experience, we suggest there would be very sound reasons for refusal of permission on the following grounds:

We are also confident that any refusal on these grounds would be upheld in the event of an appeal to the Secretary of State.

Whilst we support the concept of providing student accommodation within the town centre, with a large sum of money potentially available for this purpose, we consider that there are numerous opportunities to do this in a different but much more positive and creative way. The Council should be looking at providing the necessary accommodation within several smaller refurbishment/redevelopment projects on the numerous vacant, run down and underused sites on the fringes of the town centre shopping area. This would have the advantage of improving the appearance of several other parts of the central Conservation Area; bringing sites/buildings into new uses; and providing the necessary stimulus for further investment/improvements. Some of the available finance could then be diverted in a genuine attempt to use the Argos site for a new, meaningful civic space.

It is time to reconsider!

Hear, hear, gentlemen! I would say that knocks the Officer’s Report into a cocked hat. One wonders why and how the Leader could have swallowed it in the first place . . .

When added to an earlier quote from Councillor Janet JEFFERSON [Ind.], included in my article “ARGOS, Lies & Video” (published 4th June 2020), Mr BRADLEY’s Report begins to take on the prinicipal characteristics of a collaborative work of fiction:

The following emailed rebuttal of Councillor JEFFERSON’s claim, from the former Leader himself, is quite unequivocal:

Readers are left to draw their own conclusins. Councillor JEFFERSON cannot be unaware that she is being called out for a liar, but no defence has been forthcoming. (Janet, if you wish to publish a denial, you know where to find me). 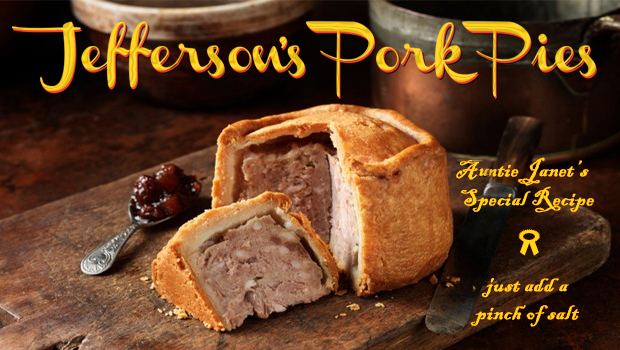 Question: If Mr BRADLEY’s masterplan was such a magnificent coup for the Council, why did he keep it under wraps until after the departure of Mr DILLON and the Conservative administration? I could not posssibly comment on the suggestion that Mr BRADLEY saw the new administration coming . . . in other words, perhaps he thought the present apology for an administration a softer target for a touch of the blarney?

The OSB is comprised, with the exception of Councillors Guy COULSON [Con.] (Chair), David JEFFELS [Con.] and, in lesser degree, Clive PEARSON [Con.], of a large complement of ‘newbies’ who, given the enormity of the commitment, may be well-advised to consider the old adage: “If in doubt, chuck it out!”. We have seen what the seasoned experts and the most experienced members think. Below, readers will find the list of names of those whose decision it will be: 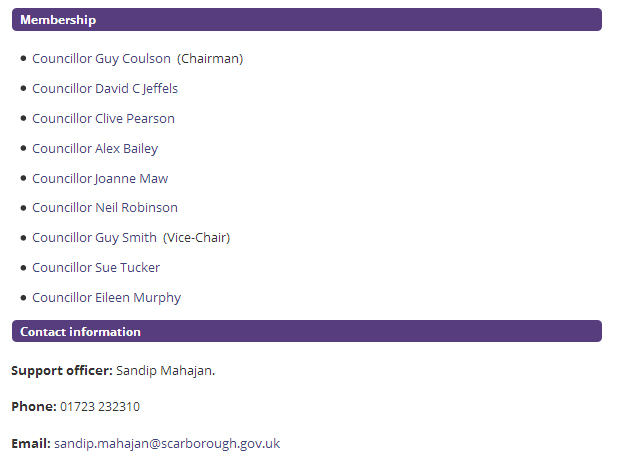 [Incidentally, Support Officer Sandip MAHAJAN is no longer with the Council. But what the hell? When was the SBC website renowned for its accuracy?]

Unless the OSB is asleep at the wheel, the ARGOS project should soon be as dead as a dodo. Next in line for ‘Call-In’ will be the Travelodge bail-out – another can of worms.

Of course, in both cases the likelihood is that the OSB will convene ‘virtually’, via ZOOM.

Members of the public who wish to attend a meeting may not – courtesy of the Coronavirus Regulations. However, they may – like approximately 100 others (out of a Borough population of 107,000) – watch ‘live’ streamings on the Council’s YouTube channel: https://www.youtube.com/channel/UCD1ooJmPKNief7i5t7-NDyg

For in-depth analysis like no other, come back to the Enquirer. 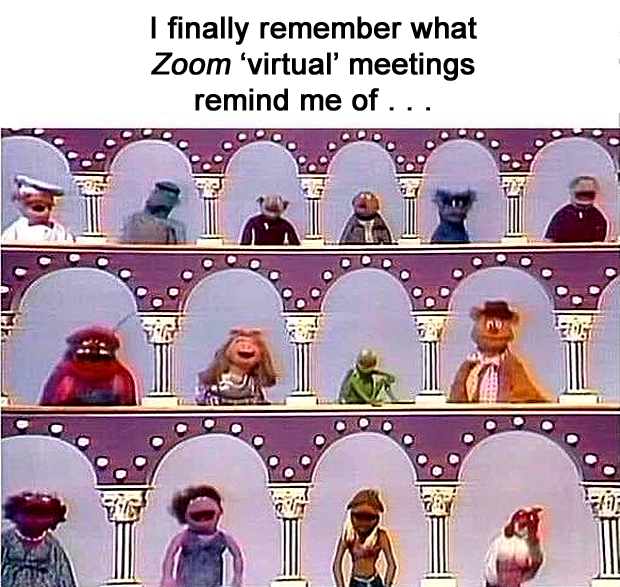