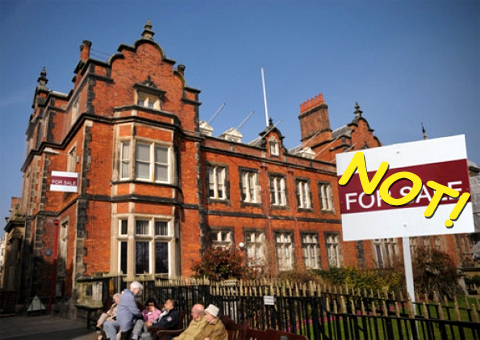 I popped along to the Town Hall / Futurist meeting at the Royal Hotel on Wed 2nd May and I find myself confused on how to respond to the Town Hall Accommodation Consultation, which can be completed online here. There are rumours flying about which make it very difficult to make an informed decision on which option is best for Scarborough.

I’m hearing that North Yorkshire County Council are making plans to become a Unitary Authority some time after 2015. This will mean that Scarborough Borough Council ceases to exist as well as the other second tier authorities within North Yorkshire such as Ryedale District Council. This will likely mean that management and administrative functions based in Scarborough and Malton will be moved to Northallerton. In effect, that would be 300+ job losses in the Borough.

Scarborough Borough Council and Ryedale District Council have gotten wind of NYCC’s intentions and are apparently looking to circumvent those plans. The current Town Hall Accommodation Consultation is part of their plan. As you all know, SBC are planning to move into the old Scarborough Building Society Building on Dunslow Road. The offices are supposedly larger than their needs and with this in mind they’ve lined up a tenant to fill the remaining space. The tenant is reputed to be Ryedale District Council. Talks have been ongoing for some time and they’ve established close working relationships.

What seems really odd is why Ryedale District Council would move out of Malton and into the Borough just to save money. It doesn’t seem sensible to administrate Ryedale from Scarborough and I’m sure the people in Ryedale would have a bit to say about that. It does look like SBC and RDC have plans to merge at some point in the future, perhaps becoming a Unitary Authority themselves and thus circumventing NYCC’s plans. Not a bad idea if you are looking to keep those jobs in the Scarborough and Malton areas.

So how do you respond to this Consultation with the best interests of the town at heart? If you ignore the rumours, then keeping the Town Hall on St. Nicholas Street is surely in the best interests of the town at the present time. Jim Dillon will still be miserable, but perhaps the staff can club together to buy him a fleece and a one bar electric heater to keep him warm in his office during the winter. Ignoring those rumours may have a long term effect that is detrimental to the town. 300+ job losses will not be pretty. If the rumours are true then it is likely in the long term interests of the local economy to move the Town Hall out to Dunslow Road.

Some have suggested it could be all a ruse by Dillon and Fox to get themselves some nice new offices. The Dunslow Road building is actually older than much of the current Town Hall accommodation. The £3million York House on St. Nicholas St. was built at roughly the same time as the former SBS Building and opened just after. So why is much of the current Town Hall accommodation so bad if it is less than a decade old? I guess the York House annex wasn’t properly planned to meet the future needs of the Council while the former SBS building is ‘ideal’ for their future needs.

So at the moment we are left with rumours of mergers, Nick Edwards’ figures which seem to change daily and Dillon’s public complaint of him being cold in his current office. Making an informed decision has never been so difficult. It would be refreshing if someone at the Council made a statement about possible mergers and a move to a Unitary Authority with Ryedale or others at some point in the future as we could see what is best for the town.

Article first posted to Real Whitby on May 6 2012.