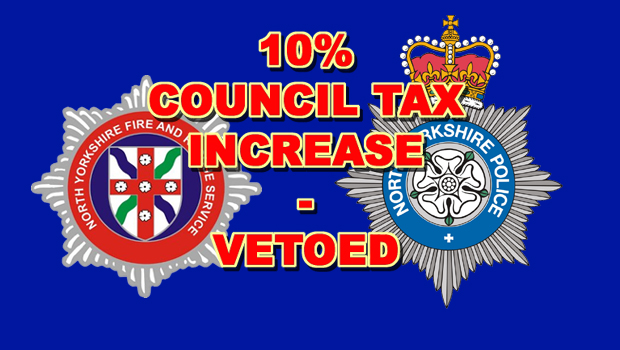 Expressing concerns that neighbourhood policing quality has declined during Mrs MULLIGAN’s tenure, the Panel vetoed the proposal despite last-minute representations, on grounds of a lack of assurance as to how the increase would be spent.

“Rejecting the Commissioner’s proposal was not a decision taken lightly by the panel and we understand the public’s need to have a more visible policing presence in York and North Yorkshire. But an increase of more than 10 per cent is simply too much to ask people to pay without further information about how aspects of local policing will be improved.”

The panel also expressed doubts about conclusions drawn by Mrs MULLIGAN from her recent public consultation, claiming that more detail was needed to arrive at a balanced conclusion.

The proposal put forward by Mrs MULLIGAN would have increased the policing element of Council Tax by £23.95 in 2019/20 for a Band D property.

The Panel (which includes representatives from each Council in North Yorkshire, plus City of York Council, and two members who represent the interests of the community) has powers to veto the Commissioner’s proposal if eight or more members concur, which they did.

Sources across North Yorkshire see the veto as “the writing on the wall” for Mrs MULLIGAN, whose recent performance (thoroughly documented by the North Yorks Enquirer) has apparently irretrievably alienated Tory grandees. Even if Mrs MULLIGAN were to resign today (which many believe she should), it may not be possible to schedule an election for the post to coincide with local elections on 2nd May 2019.