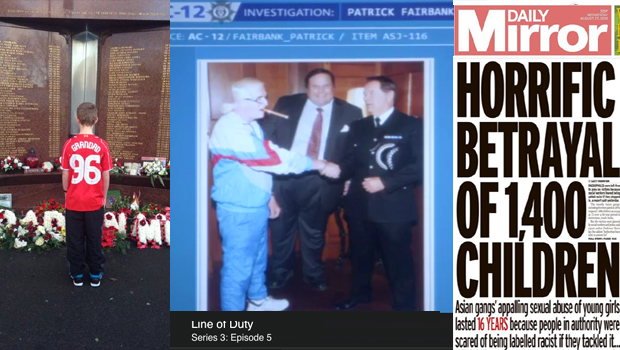 A Letter to the Editor from Adam HARNSWORTH of South Yorkshire, commenting on Police corruption; in art as in life – SAVILE, JACONELLI and an ‘unidentified’ Police Officer.

As a keen follower of your publication, I was quick to draw parallels between events in a recent episode of Line of Duty, the BBC’s true to life drama series about corrupt policing, and your brilliant exposure of former Scarborough “big noises” Jimmy Savile and Peter Jaconelli.

I would like to insert at this point a still image from the program, showing a group of men comprising a Jimmy Savile figure shaking hands with a ‘top brass’ police officer, with a obese Councillor-type beaming benevolently between them. [Ed: see above, centre]

I am sure I was not alone in pondering thewhether the producers of the program must have studied your articles? Perhaps you even allowed them to examine your files?

As a resident of Scarborough, back in the day, I of course knew that any visual resemblance between the track-suited freak, the fat Councillor and the star-struck policeman in the Line of Duty image was far from exact.

Nevertheless, an image of the vile Savile, the detestable Jaco and a certain prominent former Scarborough police officer sprang very readily to mind. For me, it stretched coincidence beyond breaking point.

The word on the street in Sheffield today is that, following the departure of South Yorkshire Police Chief Constable David Crompton (a former colleague, at the Greater Manchester Police, of the present North Yorkshire Chief Constable), there have been calls for the abolition of the force altogether. There is talk of a Greater Yorkshire Constabulary. This, to me, seems like what used to be called in my business “badge engineering”. Whatever the wording on the new stationery and the repainted vehicles, the same band of brothers (Worshipful or otherwise) will continue to cover each others backs. West Yorkshire Police and North Yorkshire Police, as with South Yorkshire Police, have some sinister-seeming skeletons in their cupboards. Rolling the whole bunch together will not scratch the surface of the real problem – which is that senior Officers regard themselves as above the law they are paid to uphold.

The political experiment of Police and Crime Commissioners, far from holding these despots to account, has proved hopelessly ineffectual. But thenm how could they hold senior Officers to account, when only a seasoned senior Officer knows how the force leadership really works? Not that I would want a former Officer to be Commissioner. Far from it. It is difficult, perhaps impossible, to imagine a cure for corrupt policing. Unless it is to be found in much smaller forces directly governed by local councils. But then again….

The sad truth is that only all that’s left nowadays of the free press (i.e. websites like the North Yorkshire Enquirer) is concerned with scrutinising the police, and we have seen how they are demonised and bullied, with the assent of the judiciary. Oh, brother!

Guardian journalist Paul Mason produced a very fine article on the subject of police unaccountability. I hope that the copyright laws will not prevent you from sharing it with your readers, beneath this letter.

My last hope is that many more will swell the ranks of your readers and become alert to the danger corrupt policing poses to our British way of life.

Keep up the excellent work. 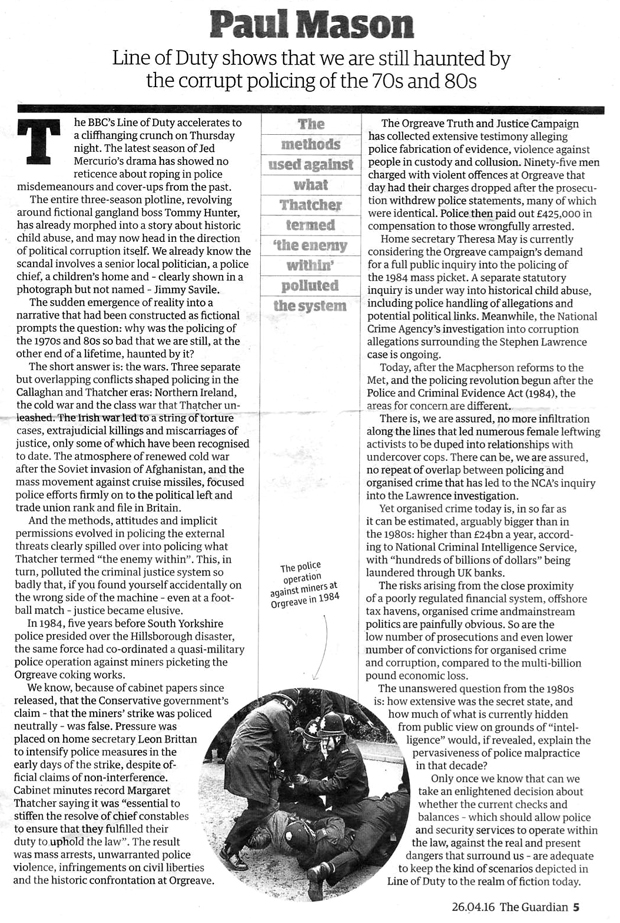